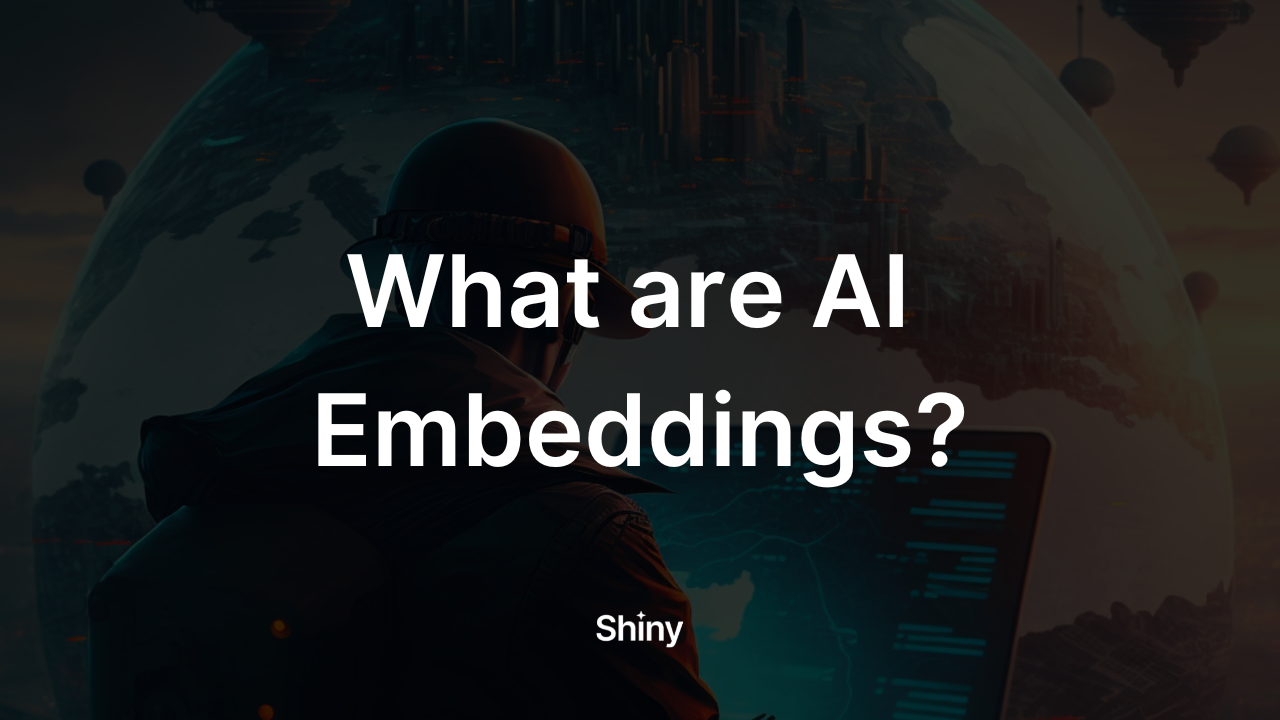 What are AI Embeddings?

If you've been alive over the last few months you'll have seen some news about what's going on in the field of Artificial intelligence (AI). And while it's most likely you've read about ChatGPT there's another specific aspect of AI that we find fascinating and it's called Embeddings.

In this article, we'll explain what AI embeddings are, why they're interesting, and some of the ways they're being used today.

We'll also provide some key people to follow in the field, learning resources, and ideas for people who want to try and build stuff.

First up, we'll explain some key terms to understand when learning about AI embeddings and why we think they are so interesting.

In simple terms, an embedding is a mathematical representation of an object, such as a word or image, in a multi-dimensional space. We know, stay with us. This allows us to capture the relationships between different objects in a dataset and understand how they are related to each other.

One key concept to understand when learning about embeddings is dimensionality. The dimensionality of an embedding determines the amount of information that can be captured about an object.

The higher the dimensionality, the more information that can be captured, but also the more computationally expensive the embedding will be.

In the context of embeddings, these vectors are used to represent the relationships between different objects in a dataset.

Another important concept is semantic similarity, which refers to the degree to which two objects have a similar meaning. Embeddings are designed to capture semantic similarity, so that similar objects are represented by vectors that are close together in the embedding space. This makes it easy to see patterns and connections between objects that we might not have noticed before. Wild.

Pre-trained embeddings are embeddings that have been trained on a large dataset and are available for use in other models. These can save time and improve performance in natural language processing tasks.

Fine-tuning is the process of training an existing embedding on a new dataset to adapt it to a specific task or domain. This is done to make the embedding more relevant to the task at hand.

Embedding Projector is a tool for visualizing the relationships between objects in an embedding space. This tool is useful for understanding how objects are related to each other and for identifying patterns in the data.

Finally, Word Embedding is one of the most common type of embeddings, where words are represented as vectors in a high-dimensional space, with the goal of capturing the meaning and context of the word.

Here are the same definitions but explained in a much simpler way. 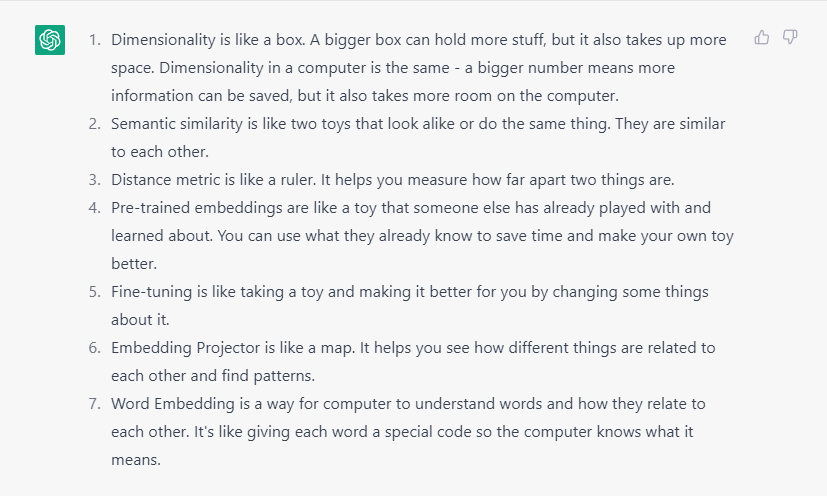 Ok now we're up to speed on some stuff, let's carry on.

What are AI Embeddings?

At their core, AI embeddings are a way to represent data in a way that's easy for machines to understand.

They're a kind of "compression" of data that preserves the most important information while getting rid of the noise.

One of the most common types of AI embeddings is word embeddings. These are used to represent words in a way that's useful for natural language processing tasks, such as language translation or text generation.

Word embeddings are typically created by training a neural network on a large corpus of text, such as Wikipedia. The network learns to map each word to a high-dimensional vector, based on the context in which the word appears.

Why are AI Embeddings Interesting?

AI embeddings are interesting because they allow machines to understand data in a way that's similar to how humans understand it. For example, with word embeddings, a machine can understand that "king" and "queen" are related, even if it has never seen the word "queen" before. So when searching, the information you get back as the user is relevant and in context.

Another advantage of AI embeddings is that they can be used for a wide range of tasks. For example, word embeddings can be used to improve things like text classification, sentiment analysis, and named entity recognition.

One more definition to understand....

NER or named entity recognition is used to extract structured information from unstructured text data. For example, in the sentence "Steve Jobs and Tim Cook announced the new iPhone at the Apple Worldwide Developers Conference."

With the use of NER, the following entities can be identified:

AI embeddings are being used in a variety of industries, including: 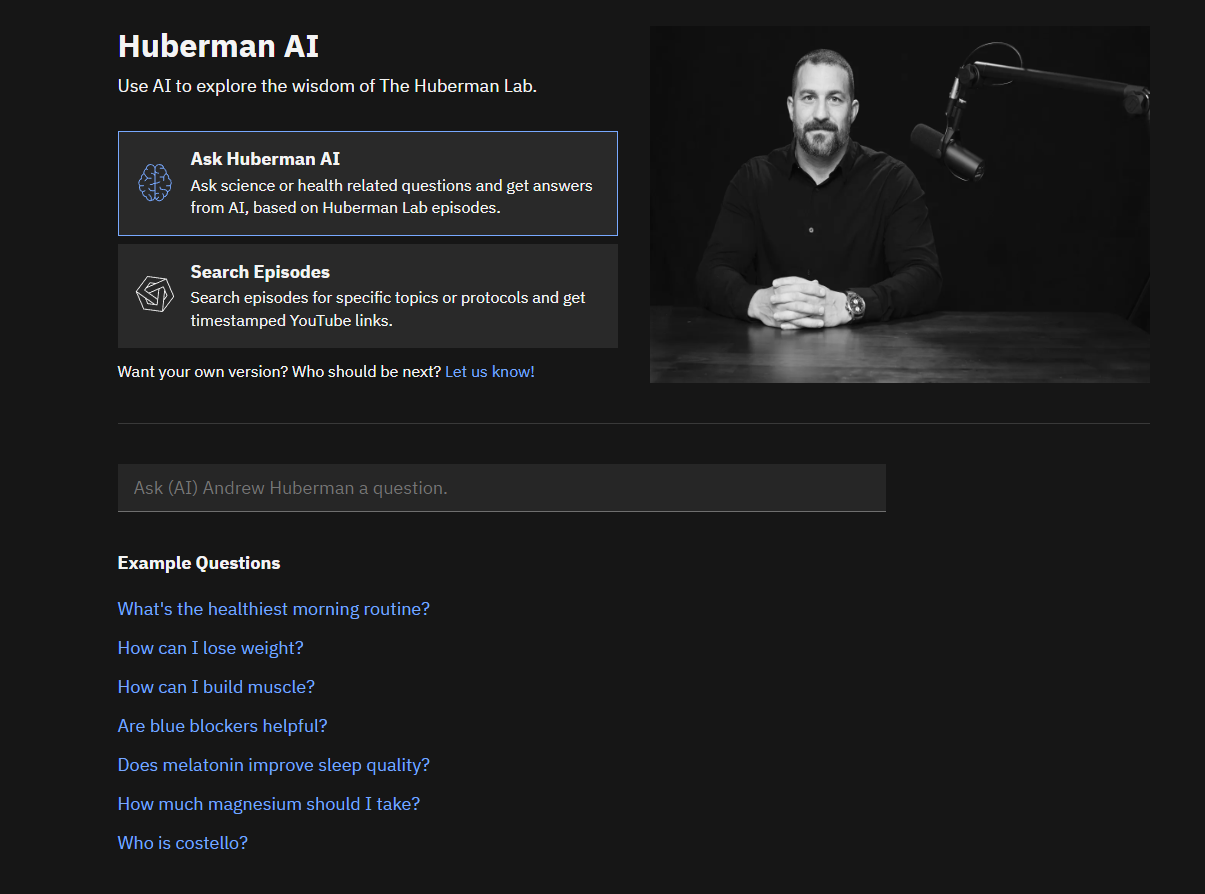 AI embeddings are like magic for machines, they help the machines understand data in a way that's similar to how humans understand it. They're being used in a variety of industries and have the potential to improve the performance of a wide range of AI tasks. Looking forward to seeing tons more use cases through 2023 and beyond.

Join 1,600 members and get the most impactful technology you can use direct to your inbox.

The world is moving faster than ever before, the newsletter is one way you can stay up to speed.

We hate SPAM. We will never sell your information, for any reason.

By joining us you'll never feel out of touch when it comes to tech.

If anything new comes out, we've got your back.

Enter your details below to join the challenge.